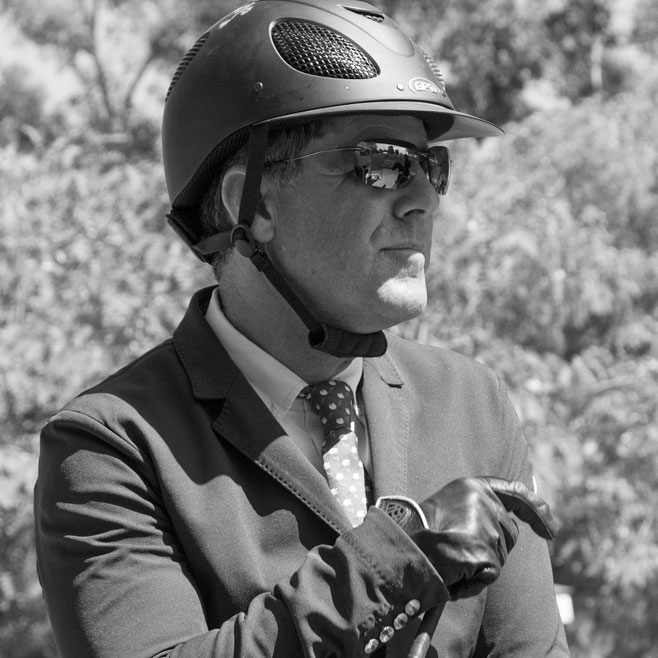 Peter grew up in Wilton, Connecticut. Peter’s grandmother introduced him to horses while visiting his aunt’s farm in Nashville, Tennessee at the age of 8. After that experience, Peter knew that he wanted nothing more than to dive into riding lessons. Peter's father, shared his sons interest in horses and competition and helped propel Peter into the horse show world in the northeastern USA.

As a junior rider Peter studied and competed in hunters and equitation with the late, great Ronnie Mutch in Weston, CT. Ronnie came from a career in advertising, and brought to the sport a creative and stylish flair. He was a very dynamic teacher and master horse-rider promoter. Ronnie’s book, “Mutch about Horses”, is beautifully illustrated with cartoons about the "lighter side" of hunting and showing horses. Peter is mentioned in the introduction of the 2001 edition.

During his college years and as a young professional, Peter worked with top riding professional and judge Carol Molony in North Salem, New York. Carol had been a champion rider, winning both the National Junior Medal and Maclay Finals. She was sidelined from competing with a riding injury, but continued to share her great expertise in teaching and in bringing along young horses, as well as promoting top show horses to National Awards. Peter learned many of these invaluable skills from Carol over the course of their 10-year relationship. Peter still practices many of these today and is very grateful to have learned from such a knowledgeable, patient and kind mentor.

Peter then traveled abroad for eighteen months, to work and show with riders in Europe. Show locations included: Yverdon Le Bain; Switzerland; Athens, Greece; Florence, Italy; the 1990 Junior European Championships in Mons, Belgium; The Balkanic Games in Istanbul, Turkey. One of the trip highlights was when a Greek rider, who Peter was training as chef d'equip, won the World Cup Qualifier in Plovdiv, Bulgaria. This experience provided Peter with the opportunity to see top tier competitions with the highest levels of riders. Peter quickly realized there was much more to learn! This started his lifelong quest to study everything he could about great horsemanship and training.

Next, Peter worked with Karen Healey for three Winter circuits in Indio California. Karen eventually convinced Peter to move to California in 2001. It was there from 2001- 2009 that Peter worked for Archie Cox, training horses to several National titles.

As a Clinician and large “R” judge, Peter has judged many prestigious competitions across the United States and Canada in the Hunter and Hunter Seat Equitation divisions. And combining his passion for teaching, and skill and experience in the sport, Peter has developed a great system and format for teaching larger groups in clinics across the country.

In 2009, Peter realized his dream of running his own stable by opening Frontier Farms™. Frontier Farms, located in Moorpark, California continues to be the most exciting and rewarding experience of Peter’s life.